PROFESSOR DON JACOB, Founder and Creator of the Purple Dragon Don Jitsu Ryu System®, an institution founded in 1970. He was born on a small twin island of Trinidad & Tobago and has studied martial arts for over five decades but is now a US citizen.  He holds a 9th Degree Black Belt and the title (Hanshi) Grandmaster or Professor.

In his prime, he has competed in many parts of the world,  traveled to over  70   countries,  and is a  recognized international instructor.

His students compete in major tournaments in Fighting, Forms, Self Defense, Weaponry, and Demonstrations.  Professor Jacob has appeared on   National and  International television on several of the world’s most influential  channels  including  ABC’s  Wide  World of  Sports  (USA)  and  Trans  World  Sports  (UK).

He has enjoyed being featured in many  Sports  Martial  Arts and  Cultural magazines,  such as  NBL Sport  Karate  International and  Black  Diaspora magazine  (US).  His presence on the cover of the  British magazine  Oriental  Arts  –  Karate of  August  1980  was an achievement that will long be remembered. 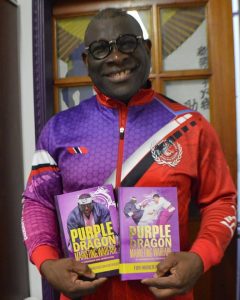 He has done videos and starred in leading roles.  Some of these are:  Enter the  Purple  Dragon,  Battle of the  Pro-Am  Champions,  Australian  Tour  1,  2,  3,  and  Don  Jacob’s  Fighting  Techniques, among many others.

He has benefited from being featured in  The  Official  History of  Karate in  America  (The  Golden  Age  1968-1986) and   The  Black  Heroes of  Martial  Arts and thousands of newspaper articles,  talk shows, and live appearances across the globe.

Professor  Jacob was one of three Purple Dragon black belts to be made an  Honorary  Citizen of  Alameda,  California in  1984,  and was given the keys to   Honolulu,  Hawaii, and   Melbourne,  Australia.

He was honored as  “The  Unsung  Hero”  by the  U.N.C.  The government came into power in  1995.    Over two hundred standing ovations for his work have not spoiled him.

He has not been overshadowed by all of his acclaims even though he genuinely relished the ones where he received standing ovations from a  full audience at  Madison  Square  Gardens in New York City, NY;  the  Canadian  National  Exhibition, Seminars in  London,  England, and the  Middle  East.

The testimonials he has received and the commendations that have come are witnesses to the fact that he is indisputably one of the world’s   most  decorated  athlete,  and  is  ranked  among  the  top performers  and  lecturers  in  the  world.

As a result of receiving Trinidad’s highest citizen award, Professor Jacob is a member of “The Distinguished Society of Trinidad and Tobago” Trinidad’s elite society for outstanding members in Trinidad.

On May 10th, 2016, Professor was once again recognized for his contributions to society and humanitarian works by the city of Newark, NJ and received a commendation from the Newark City Council.

Year  after  year,  people  come  from  all  over  the  world  to  train  with  Professor  Jacob  at  Purple  Dragon,  as  Purple  Dragon  Don  Jitsu  Ryu  System®  continues  to  transform  youth  and  adults  into  strong  and  positive  individuals.    Purple  Dragon®  has  turned  people  into  champions  and  leaders,  giving  them  a  drive  for  accomplishment  and  SUCCESS! To learn more about Purple Dragon organization visit: www.purple-dragon.com or email purpledragonhq@gmail.com